The South African state rail and port company is seeking a partner to take stakes in two container terminals to drive efficiencies and strengthen ties with global trade routes.

Transnet SOC Ltd. has earmarked its largest facility in Durban, on the east coast, along with the southernmost Ngqura site for partnerships with private operators, CEO Portia Derby said in an interview. The process is scheduled to begin with a request for information to gauge the interest of potential bidders, and the Johannesburg-based company could eventually issue shares in exchange for the investment, he said.

The plan is “really important to improve the performance of our port system,” said the CEO. “We have a clear idea of ​​the type of operations that we believe are suitable to generate value.”

Durban and Ngqura were among the worst performing container ports in the world in 2020, according to research compiled by the World Bank and IHS Markit. The former ranks last out of 351 sites in administrative terms, while Nqgura is at the bottom of the statistical table. 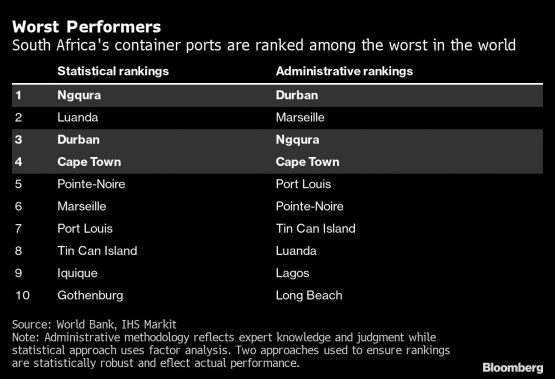 Transnet’s move is the latest sign that South Africa’s unprofitable state entities are becoming more open to private investment and participation, with the government’s blessing. Eskom Holdings SOC Ltd., the state energy giant, has welcomed the surge in generation from independent producers, while a majority stake in bankrupt South African Airways was transferred to outside entities in June.

All three companies were affected by mismanagement and corruption under the presidency of Jacob Zuma that ended in 2018, and have been scrutinized as part of an ongoing investigation into state corruption over that nine-year period.

The plan is “less about politics and more about where Transnet is today,” Derby said. The ruling African National Congress “has always believed that the public and private sectors play together.”

The South African government has indicated the need for changes to its ports, highlighting the necessary reforms in a draft of the 2050 National Infrastructure Plan published last week. The lack of efficiency and the high cost of logistics “are eroding the competitiveness” of the economy, according to the document. “Many of these problems have been attributed to the monopolistic nature of port operations.”

Derby did not comment on potential share buyers. An international port company with a presence in Africa is DP World, which operates facilities in Senegal, Angola and Mozambique. Last month, the Dubai-based company agreed to acquire South African shipping company Imperial Logistics Ltd. for $ 890 million.

The Ngqura Container Terminal was designed as a state-of-the-art transshipment hub to handle traffic from Asia, South America and West Africa. After more than a decade, the facility has yet to reach its full potential, said Velile Dube, CEO of Transnet Port Terminals.

“We believe there is great potential to take that facility and integrate it into the global terminal network,” he said. “To do that, you have to position him together with a partner.”