Peru’s new socialist government is working with the mining industry on a new approach to community relations and bureaucracy to unlock more of the country’s enormous mineral wealth.

“All companies are happy, so far,” Energy and Mines Minister Iván Merino said in an interview on Saturday. “We all agree that all projects must have a new social face, that we need a new pact.”

The minister’s conciliatory and pragmatic tone may further alleviate fears fueled by election campaign talks of increased state intervention in natural resources that would stifle investment and future production. Peru is the top copper producer after Chile and the market depends on the Andean nation developing more of its giant deposits to meet the growing demand in the shift to clean energy. 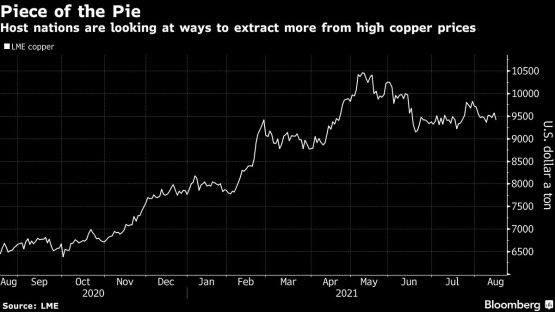 Strained relations between mining projects and often isolated rural communities, along with slow permitting, have hampered the industry’s progress.

Out of 60 mining projects in different stages, the government intends to focus first on those that are close to starting and free those that are trapped in the bureaucracy.

“We recognize that the state has not been present, that the best way forward is direct, with information exchange, so that there are no distortions,” said Merino.

When asked about Southern Copper Corp.’s Tía María initiative, Merina said her job was to deliver the program to President Pedro Castillo, who has said he is opposed to that project.

There are deposits in Peru that are richer and larger, and the region between Apurimac and Cuzco contains enough mineral to match Chile’s production, he said.

The Castillo administration is studying a proposal to raise taxes and leave more mining profits in the country, although that has yet to go through different government departments and an opposition-led congress.

The message for companies is that the Mining Ministry will guarantee clear rules and act as a mediator and facilitator to streamline “this bureaucratic tangle,” he said. “What we are going to do is promote the industry so that things are done well and we are not an obstacle.”

At some point, the Peruvian state could play a more active role in strategic sectors and may even be a shareholder in some projects, he said, but the priority is to put order in processes and requests that have languished for more than a year.

Regarding the Camisea gas fields, which Castillo promised to nationalize during the campaign, the government is investigating whether his perceptions are supported by data.

The government has received expressions of confidence while holding talks with leaders in the commodity industry. One sign of confidence is that some businesses have just paid back taxes.

“We are not on ideological issues,” he said. “We are generating consensus.”