South Africa recorded an unemployment rate of 34.4% in the second quarter of 2021, 6.8 percentage points higher than the rate in the first quarter of 2019.

Of all the countries in the world that have published data for this period, SA has by far the highest unemployment rate. The 34.4% rate is also a South African record.

South Africa’s unemployment rate has doubled since 1995, and these are the official figures from Statistics SA.

This tragic situation has to do with people’s lives and their ability to survive. For those of us in the formal sector, what we see with our family members is a pittance. It is also a huge political risk factor.

I’d say you could call this a bloodbath, but a bloodbath can be cleansed. This situation, however, will take the better part of a century to fix now, I think.

No one should take this lightly. That it is not made front-page news every day and that our leaders are not held accountable amazes me.

The rise in unemployment from 32.6% to 34.4% in the first quarter is due not so much to job losses as to the total lack of new job creation. SA lost 53,000 jobs, but unemployment increased by 186,000, indicating that more people entered the market (from a low participation rate, since one can only be unemployed if you are looking for work and can start to work).

Our low unemployment rate has averaged over 25% for 25 years. This is nothing more than ingrained poverty and misery for a large part of our population.

In 1932, the United States reached 25% unemployment for a few months and was called the Great Depression. With unemployment at 34.4% and an expanded definition rate of over 44%, I’d say it must be a clinical depression. The global unemployment rate for 2021 is estimated to average 6.3% this year, according to the International Labor Organization.

This, more than anything, puts the unemployment rate of 34.4% into context.

That is a context so that you, dear reader, can see that this is not a sad economist saying depressing things to you for no reason. In fact, some countries have lowered their unemployment rates, even in the eurozone. (See chart below).

So just blaming Covid tells me that SA is taking the easy route. Yes, Covid is a real problem and the closures destroyed a lot. But without real cash to bail out the productive sectors, the productive part probably had to contract much more than it would have been the case. Arguing about the demographics of those who needed help also destroyed the money. Like corruption.

Greece, which was considered a basket case a decade ago, has seen unemployment cut in half in a decade or so. Between 2019 and 2021, Greece’s unemployment rate fell by 3.5 percentage points. This was during a pandemic that affected the tourism industry everywhere.

Greece now has an unemployment rate less than half that of South Africa.

In fact, one can do it, but it takes leadership and letting the market do most of the work. The expanded definition of 44.4% is also the highest level that the expanded unemployment rate has reached.

SA now has more unemployed adults by this definition than people in the formal sector.

Frankly, I don’t know of any other modern economy where this is the case.

It means that even if the country doubles the formal sector overnight, we would still have more than 1.7 million unemployed people.

Only six million people are long-term unemployed. Almost 800,000 people who have completed tertiary education are unemployed. That’s more than all the students currently in college full time. Another three million people with Matric are also unemployed according to the official definition.

The next five years of students who left school together would be less than those who finished school and are now unemployed.

So how many people work?

Fewer than four in 10 South Africans of working age are employed, and only 37.7 out of 100 people between the ages of 16 and 64 are employed.

This is one of the lowest employment rates known and shows the depth of the crisis.

Simply put, there are now more than a million people unemployed than those working in the formal sector. 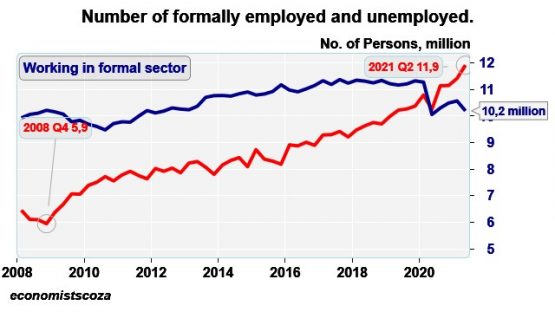 How many people depend on each worker?

Less than a quarter of the total population is employed. This means that an income from employment must be spread out to cover at least three others (four people in total).

South Africa is now near a tipping point.

That’s the point where our total employment rate drops to just a third. In about a decade, our employment rate has gone from 46 in 2011 to 37.7 of all working-age adults employed.

When we drop from one-third of all employed working-age adults, the dependency ratio will rise even further.

But let’s say the proportion of employed adults falls another eight percentage points or so in the next decade and other proportions such as the formal and informal sectors remain the same as they do now, then the formal sector will only employ one in five of the age group. to work. Adults.

Add the rest of the population and the person employed in the formal sector would have to feed and clothe eight people. Probably only one in 10 would pay the PAYE tax, which means that the government would have even less to share than now and that will further hurt their choice.

We really have fallen quickly and perhaps Covid was an excuse to cut payroll, or the impact of corruption has come home to fry us.

The good news may be that we will see the worst before the desperately needed shift in economic policy direction occurs.

The bad news: Will anyone be strong enough to change the course of the Titanic, or will it be the whole world fighting over the life rafts and the dumb politicians running away with the sun loungers?