Stocks around the world came under pressure after China stepped up its extensive regulatory crackdown on cryptocurrencies. Bitcoin, Ether, and other digital tokens fell.

In another blow to investor sentiment, the world’s second-largest economy said that cryptocurrency-related transactions will now be considered illicit financial activity. The decision strikes the heart of a market that is booming this year, while raising concerns about increasingly stringent regulations for various industries, from tech to after-school tutoring and ride-sharing.

“China is grappling with some systemic fiscal challenges right now,” said David Tawil, president of ProChain Capital. “My expectation is that this is ‘real’ and that China will not reverse course in this position anytime soon, if it ever will. However, if this move was unavoidable, it better happen sooner, so the investment community can digest and move on. “

Tech stocks on the S&P 500 fell, while finance companies outperformed. The dollar went up. The Nasdaq Golden Dragon China Index, which tracks some of the Asian nation’s largest firms listed in the US, plunged as much as 3.6%. Cryptocurrency-related stocks such as Riot Blockchain Inc. and Marathon Digital Holdings Inc. fell. 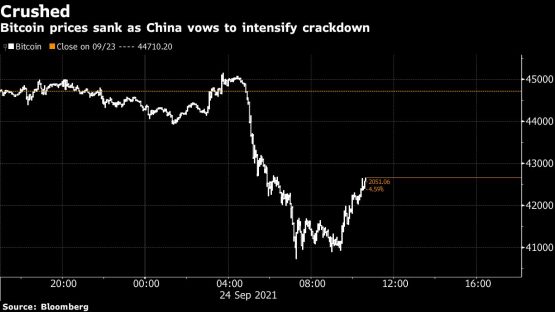 Volatility in US equities and major developed currencies is swinging at the same rate in more than a year as risks from China compete with central banks to drive market movements. Traders pulled $ 28.6 billion from U.S. equity funds in the week through Sept. 22, the largest redemption since February 2018, according to a Bank of America Corp. note, citing data from EPFR Global. .

The US economy has met the Federal Reserve’s conditions to begin reducing its asset purchases soon, according to two Fed regional bank presidents.

“I support starting to reduce our purchases in November and concluding them during the first half of next year,” said Fed Bank of Cleveland President Loretta Mester. Separately, her Kansas City counterpart Esther George said “the criteria for further substantial progress have been met,” referring to the central bank’s fine-tuning test.