The battle between Checkers and Woolworths Food for higher-income shoppers has been fierce in recent years.

Checkers announced its decisive entry into the convenience food market in early 2017 after an aggressive push to put convenience food-type products on its shelves in 2016. For years prior to that, it had steadily refined its pricing proposition and heritage of your store to ensure sufficient segmentation between the Checkers and Shoprite brands.

A decade ago, the landscape looked very different.

Woolworths was in the midst of converting its local franchise stores to corporate-owned stores, as it needed to own them to simplify offering to its customers and solidify its loyalty program (and make sure it controlled the margin).

It hadn’t even launched its biggest grocery stores, rather curiously described at the time by then-new CEO Ian Moir as “superwoolies.”

Its food business in the year to the end of June 2011 recorded a turnover of R13.5 billion from 323 food stores, comprising 150 independent stores and 173 food departments within the largest stores. This excluded their 43 sites on Engen

At the time, Shoprite Holdings did not disclose Checkers’ performance separately, but had 158 Checkers stores nationwide and 26 Checkers Hyper stores (compared to 409 Shoprite stores and 223 U Save outlets).

The total turnover of its local supermarkets in the year to the end of June 2011 was R57.2 billion. Assuming that the contribution to the turnover of Checkers and Checkers Hyper did not come close to the levels of now (40%), it would probably have been around R17 billion to R18 billion for that year.

At that stage, Damas y Damas Hiper’s business would not have been more than a third larger than Woolworths Food. Of course, this is a bit of an unfair comparison, as there is a certain amount of general merchandise sales in the Checkers and Checkers Hyper figure (maybe R1 billion to R2 billion). The core food business may have been about 20% larger than Woolies Food in 2011.

Fast forward a decade, and Checkers (and Checkers Hyper) are now the star of the show for Shoprite Holdings.

The unit’s turnover was R53.8 billion in the 53 weeks to July 4, that’s almost exactly three times the estimated figure in 2011.

The group says this higher-revenue-focused segment grew at nearly twice the rate of the rest of South Africa’s supermarket market in the six months between July and December.

During the first six months of this year, the segment grew at more than one and a half times the rate of the rest of the market.

Its strategy of competing aggressively with Woolworths is delivering.

At the end of June, it had 268 Checkers stores in South Africa (including 38 Checkers Hyper stores). That means it has added 72 supermarkets in the last decade, which equates to around seven new stores (net) a year (plus 10 new Hyper stores throughout the decade).

These seem relatively modest numbers, but the group has expanded the number of Checkers stores by about half (46%) in 10 years.

It has opened 42 Checkers Fresh X stores offering the promise of a target 80 “fresh food theater”.

The group says private labels account for 18% of sales in its “RSA supermarkets”; That number is surely higher in the ladies’ business, which focuses on freshness and comfort. He says he has earned R204 million on his share of “fresh” (convenience) in the last 12 months.

The launch of its Checkers Xtra Savings loyalty program has been a success and has helped the group defend its pricing proposition, especially against rival Pick n Pay (with Smart Shopper).

It has arguably been more successful with the launch of the Checkers Sixty60 on-demand delivery service in late 2019.

At the end of June, Sixty60 was available in 233 stores (not far from its total footprint). This service allows Checkers to compete in the convenience space, something their footprint has historically not allowed them to do (think smaller neighborhood-focused Woolies Food stores versus traditional Checkers supermarkets).

Yes, it continues to open stores in more areas, allowing it to be closer to the communities, but it hasn’t really ventured into the smaller-format, strictly convenience store. Sixty60, with a subset of products (17,000 of the more than 25,000 that a typical Checkers supermarket has), helps you close that gap.

By contrast, Woolworths Food is now a R38.3 billion-a-year business, almost three times the size it was in 2011.

At the end of June, it had 348 stores in South Africa (excluding its 81 Engen sites). Of this base of 348, 194 are independent grocery stores, a 29% increase from a decade ago. Usually these focus more on convenience (aside from the big independent market stores at certain nodes).

The number of full-line Woolies stores (fashion, beauty, home and grocery) has decreased (by 11%) over the last decade.

This makes the overall growth of grocery stores seem quieter than it has been.

Read: Woolies is reducing space by 11% to reverse the weakened clothing business 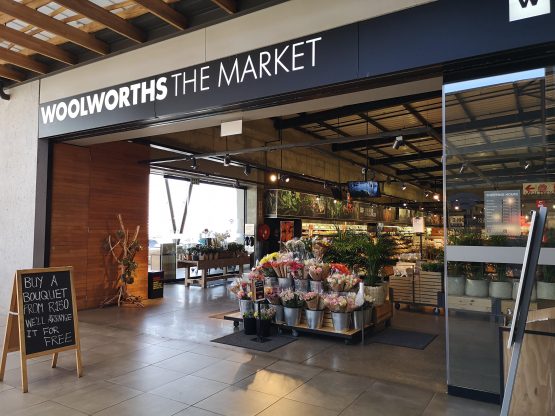 Woolworths The Market grocery stores have a larger format and are located at specific nodes like Benmore Center in Sandton. Image: Moneyweb

This tells a much better story of the scale of your food business growth since 2011. Even in full-line stores (think Sandton City, for example), food has taken up more of the space.

While Moir will be remembered for buying David Jones in Australia, which has underperformed, his strategy to build a large food business means the group is in much better shape today than it could have been.

In his most recent results presentation, new CEO Roy Bagattini highlighted the opportunity that exists to leverage its “food formats in a ‘Food + Home’ concept”.

It intends to expand its leadership position in food and will continue to test new formats. It was late to the game with on-demand delivery (Woolies Dash was released as a test late last year) and the service has been somewhat disappointing, particularly considering the ongoing initial issues.

But the group says that online sales comprise 2.3% of total food sales (around R900 million a year). Is Checkers Sixty60 bigger? Probably not yet.

Due to the change in the market (accelerated by Covid-19), where new online and on-demand shopping habits are being formed, this will be a major battleground for these two in the next decade.