Given that BTC peaked in April and then gave up nearly 50% of its value over the next two months (before making a substantial rally), the question arises: Are we in the middle of a bull or bear market?

To help us answer this question, we are joined by Brett Hope Robertson (BHR), investment analyst at Revix.

How do we know when to call it a bull or a bear market for cryptocurrencies?

BHR: There are different opinions about that. In traditional asset classes, a bear market is typically characterized by a 30% price drop. Obviously, in cryptocurrencies, a 30% drop is like a normal Wednesday afternoon, so the rules are a bit different. Crypto seems to have a ‘buy the dip’ mentality, which is why we often see these 30% selloffs bought back in a bull market. When so many people buy with leverage, aggressive price swings occur and it is difficult to see the signs of a bear market; even a 50% drop could recover in a couple of weeks.

After the parabolic rise in price earlier this year, it was inevitable that there would be some pullback and consolidation in prices. As much as people want BTC to continue to rise, things aren’t moving in a straight line, but there is evidence to present that the crypto bull market is still intact for now.

From a macro perspective, the on-chain data is showing bullish signs. For one thing, the Bitcoin supply impact rate is climbing to levels last seen when Bitcoin was at $ 57,000. This graph shows currencies that have not moved in a long time (therefore considered unavailable. ) on currencies that have recently moved and are therefore considered more available. . This rally shows that long-term holders continue to hold and accumulate as currency availability dwindles. Therefore, the bid / ask is pricing Bitcoin at $ 57,000 levels.

Another way of looking at this is through pressure to buy or sell “whales”. The ‘whales’ are people who own more than 1000 bitcoins. Whales are opportunistic, when they foresee a period of bullish price action in the future they have been known to accumulate. We can see this below. 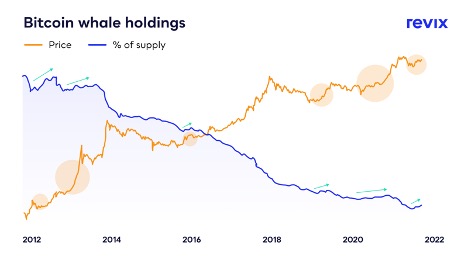 Technically, Bitcoin looks a bit shaky. China’s ban on bitcoin mining drove the price of Bitcoin to a low of $ 30,000. We have recovered a bit since then, but we seem to have hit a lower high. This basically means that buyers were unable to get the price of Bitcoin above the previous high of $ 65,000, and now Bitcoin could be in a downtrend, forming lower and lower highs. With that said, we just saw the golden cross on Bitcoin, a notoriously bullish technical trading signal.

Crypto analysis is a relatively new discipline, and we are dealing with data that is only a few years old, as opposed to stocks where we have the benefit of decades of data.

Under normal circumstances, we could say that a 50% drop in price would constitute a bear market, but with a highly leveraged system, the price action of cryptocurrencies becomes difficult to read. From a chain view, we can clearly see bullish buying and higher demand. On this basis, I would say that we are still in bullish territory.

Is it important to understand where we are in the cycle?

Bitcoin classically has a four-year cycle, and we are in the middle of it. Typically, the bull cycle should come to an end by the end of this year, as it has done twice before. If we are in a bear market, we would expect lower and lower prices over a period of years to come. I don’t think it’s a realistic scenario given the massive mainstream adoption we’re seeing around Bitcoin and the fact that on-chain metrics show otherwise.

Yes, there will be fixes along the way, but if the years gone by are anything to go through, we should have an exciting end of the year.

If you don’t want to trade the market or worry about market changes, then dollar cost averaging has proven to be a great way to accumulate Bitcoin. By that, I mean buying a regular amount of Bitcoin every month, regardless of where the price is. I don’t think people should try to time the market at a micro level. Seasoned traders struggle to do this with all the resources at their fingertips, so I think it’s silly to think that you can beat them. Most traders lose: they end up buying the highs and selling the lows. due to FOMO [fear of missing out] and panic respectively. What you can do is set a predetermined interval in which you add a certain amount to our position constantly over time.

What about other cryptocurrencies like Ethereum (ETH), Solana (SOL) and Cardano (ADA)? These coins show even more dramatic price performance when compared to BTC. Are they in a bull or bear market?

BHRThe same applies to these altcoins, which have a completely different business case than Bitcoin. These are blockchain-based networks competing to become leaders in the new financial era. They range from stock exchanges to insurance and all financial sectors in between.

For the most part, altcoins and Bitcoin move together.

It’s like the old adage reinvented: ‘When Bitcoin sneezes, the rest of the crypto market catches a cold.’ The only real difference is that these altcoins are much more volatile.

Basically, we take the volatility of Bitcoin, inject it with steroids, and call them altcoins.

But how volatile are they?

For example, while BTC has fallen around 50% since April, most, if not all, altcoins have fallen more than 65%.

The way to see the development of these altcoins over time is by tracking how much money they are attracting from the masses.

We measure this using the percentage of dominance of the Bitcoin market.

The above is true today.

Bitcoin’s dominance is 42%, which is almost identical to May 2018 … oddly, this was the point where the 2018 bear market was locked. If we were to enter a bear market again, the same dominance chart would develop as Bitcoin outperforms altcoins in bear markets.

Knowing where we are in the cycle is important as we want to know whether we should buy dips (as we would in a bull market) or avoid these currencies altogether (as in a bear market). No one really knows the beauty of this space – we are all using the limited data we have (just over 10 years of history) to figure this out.

I think we are in an interesting divergence phase. The price data may be setting up for a bearish structure, while the chain data is showing bullish structures. There is an old saying, don’t listen to what they say, watch what they do … and the whales seem to be buying.

Why do cryptocurrency prices fluctuate so aggressively?

BHR: This is a symptom of a relatively immature market and large amounts of leverage. The more mature an asset becomes, the less volatile the price action is, and we can see this with respect to Bitcoin versus altcoins.

While people may think that Bitcoin is like gold in that it has similar properties, the data shows that this is not true. Recently it has been acting more like technology than gold. Cryptocurrencies themselves are inherently viewed as a risky asset, which means that when there are crashes around the world, these assets are sold first because they are attractive as a risky bet. When the world is in crisis, such as the recent risk of Chinese real estate developer Evergrande defaulting on its debt obligations, investors look to safe assets (risk-free assets).

Until cryptocurrencies are more accepted, regulated, and their income-generating networks easily make them valuable, I believe that cryptocurrencies will continue to be considered risk assets.

Revix brings simplicity, confidence and excellent customer service to the investment. Its easy-to-use online platform enables anyone to securely own the world’s top investments with just a few clicks.

Revix guides new clients through the registration process to their first deposit and first investment. Once configured, most clients manage their own portfolio, but can access support from the Revix team at any time.

This article is intended for informational purposes only. The opinions expressed are not and should not be construed as investment advice or recommendations. This article is not an offer, nor is it a solicitation of an offer, to buy or sell any of the assets or securities mentioned herein. You should not invest more than you can afford to lose, and before investing, consider your level of experience, your investment objectives, and seek independent financial advice if necessary.