The global economy is entering the final quarter of 2021 with a growing number of headwinds that threaten to slow the recovery from the pandemic recession and prove the benign views of policy makers on inflation wrong.

The expanding delta variant continues to disrupt schools and workplaces. US lawmakers are arguing over the debt ceiling and spending plans. China is suffering from an energy crisis and pursues regulatory crackdown, while markets remain nervous as China Evergrande Group struggles to survive.

Fuel and food costs are skyrocketing around the world, combining with congested ports and strained supply chains to drive up price pressures. The labor shortage continues to affect some employers.

Although the expansion appears intact, such a backdrop is stoking fears of a combination of weaker growth and faster inflation to come, threatening to complicate nascent efforts by central banks to reduce stimulus without shaking markets.

“Expectations for a rapid exit from the pandemic were always misplaced,” said Frederic Neumann, co-director of Asian economic research at HSBC Holdings Plc in Hong Kong. “The total recovery will be measured in years, not in quarters.” Below is a breakdown of the main risks:

China’s energy travails have forced manufacturers to halt production and prompted economists to cut their growth forecasts. Bloomberg Economics expects power shortages to have the biggest impact on expansion since the national shutdown when the pandemic first broke out.

The regions affected by the curbs make up about two-thirds of the economy and include the top five provinces in terms of gross domestic product: Guangdong, Jiangsu, Shandong, Zhejiang and Henan. In a sign of things to come, manufacturing activity contracted in September for the first time since the pandemic began.

That compounds a drag on the crisis engulfing Evergrande, the world’s most indebted developer, and a more general slowdown in the all-important housing sector. President Xi Jinping’s push for stricter regulations of industries, including technology, also baffles investors. 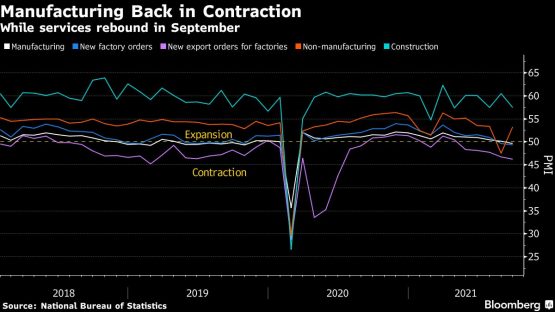 China’s energy woes also risk triggering a further surge in global agriculture and food prices, as it means the country is poised for a tough harvest season, from corn to soybeans to peanuts and the cotton. Over the past year, Beijing imported a record amount of agricultural products due to domestic shortages, pushing global food prices and costs to multi-year highs.

A United Nations index has risen 33% in the last 12 months. At the same time, some gas, coal, carbon and electricity benchmarks are breaking records.

The price of oil topped $ 80 a barrel for the first time in three years and natural gas is the most expensive of seven, helping drive the Bloomberg Commodity Spot Index to its highest level in a year. TotalEnergies SE CEO Patrick Pouyanne said the gas crisis hitting Europe is likely to last through the winter.

It could get even worse. Bank of America analysts tell clients that there is a possibility that oil will hit $ 100, causing an economic crisis. With the northern hemisphere winter approaching, the delta variant remains another concern.

That helps explain why congestion is mounting at a key crossroads for international trade, from the ports of Shanghai and Los Angeles to the rail yards of Chicago and warehouses in the UK. 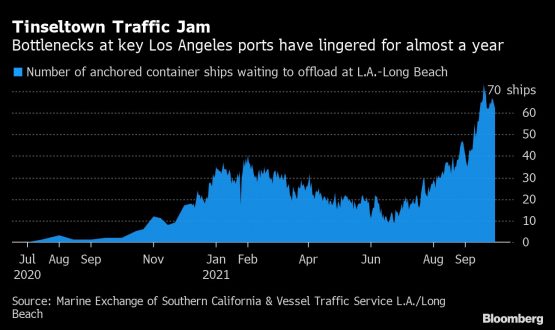 Retailers, including Costco Wholesale Corp. in the US, are ordering everything possible to ensure shelves are full, particularly for the Christmas shopping spree at the end of the year.

Meanwhile, manufacturers are having trouble sourcing key parts like semiconductors, chemicals, and glass.

Dubai’s DP World, one of the world’s largest port operators, expects the bottlenecks that have shaken global trade flows to continue for at least another two years.

There are also labor shortages in some industries, and next week’s payroll report in the US provides an idea of ​​the scale of the problem for companies in September.

The glow also comes from US economic policy as the locomotive of global recovery. While President Joe Biden deflected a disruptive federal government shutdown for now through an interim funding bill, fractured talks about his $ 4 trillion economic agenda continue with deep divisions among his Democrats on the way forward.

The compromise on the closure came after Treasury Secretary Janet Yellen warned that her department will effectively run out of cash around Oct. 18, unless Congress suspends or increases the federal debt limit. Failure to do so would trigger both a recession and a financial crisis, Yellen said.

Globally, support for fiscal policy will slow until 2022 after governments rack up the largest debts since the 1970s. Biden and Yellen must also decide whether to grant Federal Reserve Chairman Jerome Powell a second term, a decision that could also shake markets.

For Powell and his international counterparts, the combination of slow growth and stubborn inflation is a challenge.

Only on Friday saw the news of the fastest euro zone inflation in 13 years and a US gauge rose the most on an annual basis since 1991.

And that makes plans to cut bond purchases or raise interest rates a risky proposition. Many Latin American central banks and some in Eastern Europe have already increased borrowing costs, Norway has just become the first developed nation to do so, and the Fed is signaling that it will cut its bond buying program starting in November.

Deutsche Bank AG strategist Jim Reid acknowledges that the world economy may be facing its most aggressive period for monetary policy in a decade.

“Central banks are playing with fire by downsizing to avoid inflationary pressures without being completely sure where we are in the cycle,” said Alicia García Herrero, chief economist for Asia Pacific at Natixis.