The once powerful AngloGold Ashanti has been removed from SA’s top 10 mining companies list, replaced by Royal Bafokeng Platinum, according to the PwC SA Mine 2021 report released Tuesday.

“The gold sector experienced the largest negative share price movements as a result of declining gold stocks and a lack of investor confidence in the precious metal,” the report says.

“In addition, gold was also ranked as the least preferred commodity in June 2021 and this is reinforced by the decline in the position of AngloGold Ashanti and Gold Fields.” In terms of rankings, Impala Platinum climbed the most, moving from sixth place to replace AngloGold Ashanti in the top three, after its market capitalization more than doubled between June 2020 and June 2021.

Higher prices for PGMs and iron ore were the main drivers of the 63% increase in mining revenue for the year through June 2021, according to the report.

Mining was one of the most resilient sectors in the South African economy, benefiting from an average 71% increase in PGM prices and a 48% increase in iron ore prices. These higher prices helped offset the drop in production that occurred at the beginning of the hard lockdown in March 2020.

Read: How the miners have come to the rescue of the fiscus and shareholders

There was a 13% increase in mining production over the previous year, with diamonds, manganese ore and chromium leading the way. Diamond production increased 30% year-on-year, while coal decreased 6%.

Iron ore prices increased by more than 200% from the previous year and this was largely driven by China’s rapid economic recovery and the subsequent reopening of other global steel markets.

Another sign of the health of the sector is the level of dividends paid to shareholders. 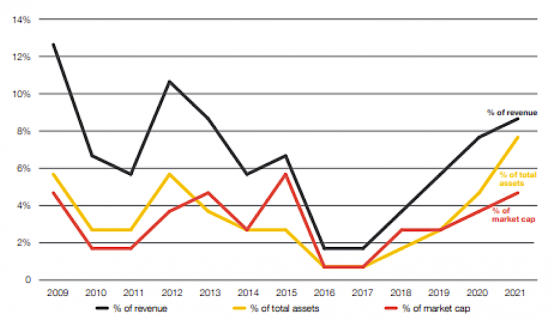 Although gold mining companies are struggling to make the top 10 list ranked by market capitalization, Harmony increased revenue by 42%, due in large part to a 26% improvement in production and a median price of gold in higher rand.

“Debt has been largely repaid and shareholder earnings reached record rand levels for many companies. The fiscus benefited from increased direct and indirect taxes and mining royalties as it was able to support continued socioeconomic support during the pandemic.

“The strategies will include expansions and new developments, acquisitions, strengthening of local infrastructure and host communities, market development and investments throughout the value chain. Executing these strategies will require a disciplined and sustainable mindset over the long term. ”