We need an honest discussion about South Africa’s economic policy and the disaster that is taking place in much of our manufacturing industry.

Manufacturing production levels during the three months through July were lower than in early 2005.

After 16 years of the Industrial Policy Action Plan (IPAP) and so many versions, South African manufacturing has gone nowhere. In the second quarter, the result was that fewer people were employed in formal manufacturing than in 1969.

Unemployment: There is no light at the end of the tunnel.
Unemployment in South Africa is much worse than a bloodbath

Some would say that South Africa is feeling the impact of China and we have to get used to it.

But many other economies have more people employed in manufacturing than two decades ago, many of whom are African. 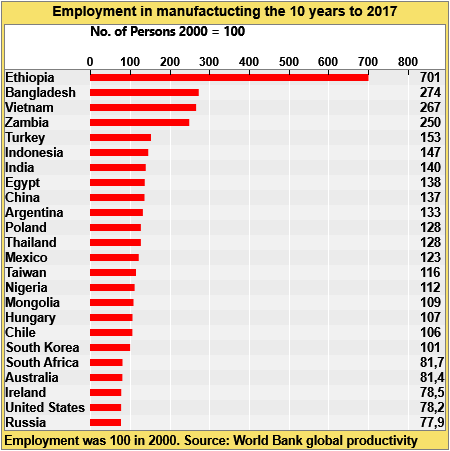 We cannot “get used to it”.

I think we are feeling the impact of high costs for energy, labor, water, and regulations like black economic empowerment (BEE).

We are also impacted by people who should not intervene in the economy but who do so because of the power granted to them at so many levels, from the municipal level to the national government level.

The ruling party and incompetence have meant that the trains do not bring the workers closer to the Wadeville factories and that the water does not flow in Standerton. Corruption has resulted in higher energy prices and inconsistent supply, while thieves are rich and free.

Read: How to Save the Sinking Manufacturing Ship

Furthermore, fast-growing manufacturing countries no longer only include China.

Outside of China, Ireland, Nigeria and Georgia are the top three fastest growing manufacturing countries in the 10 years to mid-2021.

Among 59 countries with a manufacturing history of a decade, the median increase during the last decade it was 15.5%.

South Africa is de-industrializing both in absolute and relative terms.

Our share of global manufacturing value added has declined since the 1980s.

Today SA is doing worse than very large advanced economies, which should not be the case: They have large manufacturing sectors, but their costs are higher and they have more regulations than most countries. Since 1990, employment in the South African manufacturing industry has decreased by 40%. Yes, you read that right.

Since 2019, when the minimum wage structure was implemented, employment in the industry has fallen by 11.6%

These figures are for the second quarter of 2021. We do not yet know what impact the riots and looting have had on employment.

Remember also that employment is something of a lagging indicator in the sense that downsizing decisions are not easy to make, nor is the process quick. Covid-19 hurt everyone, but very few as badly as SA, as far as I can guess from recent data.

This feels like the great financial recession, where SA lost one in eight jobs and took longer than most to recover.

SA is no longer Africa’s ‘most industrialized economy’

Egypt, Ethiopia and Nigeria now employ more people in manufacturing than South Africa. Manufacturing employment as a percentage of the population has been higher than in South Africa in all three countries in recent years.

There is no shortage of ideas or plans, as the Ipap is updated every year, but still more than 500,000 people fell short of the target.

Read: TFG opens a new clothing factory in Joburg for the hearing impaired

Interestingly, we added quite a few jobs as a result of the data reviews – most of those jobs already existed in 2007, but were not recorded then. Based on this, the real deficit would be closer to 700,000! The reasons for job destruction are plentiful.

First, South Africa’s manufacturing output peaked in early 2008 and has since fallen by 15%.

With power outages, water shortages and extreme price increases in companies’ utility bills, it has become much more difficult to do business in South Africa, and the government is seen as doing nothing.

As many have said: the more the government says it will fix its public services, the less it gets done.

The issue of redistribution continues, with high taxes and labor costs steadily increasing, which means that it is difficult for SA to compete. Strikes take place more frequently here than in other countries and are often quite destructive, in part because workers are told how the owners simply exploit them.

On top of that, the ruling party and others still want to dilute the property.

Then there is the fact that South Africa is full of rent-seeking intermediaries who drive up input costs and add a percentage to sales prices to state-owned enterprises (SOEs), who then need to raise their prices for customers even further.

State-owned companies, which are often more exploitative in their prices than almost all real private sector companies, often do not fully deliver services as promised.

But above all it is the attitude of the government that often threatens the private sector. He is never considered to be on the business side.

During Covid, it was mainly private sector funds that helped businesses, as the government thought it had to help the poor and unemployed.

The Temporary Assistance Plan for Employers and Employees (Ters), although tied to previous contributions from workers and employers to the Unemployment Insurance Fund (UIF), bailed out some employees, as did low interest rates.

But unlike almost everybody Governments around the world, ours did not help fund businesses during the shutdowns.

If SA companies did not have 19% of GDP in their bank accounts, there would not be an airline, not a hotel, not even a wine farm.

The government has shown that it does not understand the basic fact that it is easier to save something than to try to build it again.

African diplomats have declared that South Africa is now seen as one of the most corrupt African countries. Our rent hunters and government officials are seen as arrogant, corrupt and, in some cases, just plain dumb.

‘Jobs first’ should be the center of attention from now on

The fall of employment in the manufacturing industry is a fact.

Friends call the East Rand ‘The Wasteland’ and think we can make good horror movies out of shattered factory buildings.

In our industrial areas around the Witwatersrand there are so many factories and warehouses for rent that it is hurting not only the workforce but also real estate companies, local government revenue and of course other service providers like taxi drivers .

While South Africa’s economy appears to be pumping and performing very well today, that is an illusion that massive increases in commodity prices have created.

If we don’t address the manufacturing sector and eliminate self-created chains like BEE, expensive fares and fares, and non-operating trains, the high cost of labor will continue to affect our competitiveness and impact our ability to survive.

This is the time to take advantage of commodity windfalls and rebuild manufacturing.

If we do not build real productive capacity in South Africa, we will have increasing inequality. South Africa was one of five countries where poverty had already risen before the pandemic.

Giving social subsidies to the poor will never meet even their basic needs, especially in a stagnant economy.

We need manufacturing companies and the jobs they create.

Read: A universal basic income grant is not the solution