China’s economy is at risk of slowing down faster than global investors believe, as President Xi Jinping’s push to reduce his reliance on real estate and regulate sectors, from education to technology, is combined with energy shortages and pandemic.

Bank of America Corp. and Citigroup Inc. are among those who warn that the expansion will not reach the 8.2% expected by the consensus of economists this year. The fall could last until next year, which would force it to grow below 5%, they warn. Outside of 2.3% in 2020, that would be the weakest in three decades. Bank of America strategists think Xi may even be embracing a once-in-two-decade economic restructuring, similar to Deng Xiaoping’s modernizations in the late 1970s and Zhu Rongji’s modernization of state-owned enterprises and finances. in the 1990s.

“If so, the flow of data from China could confuse even pessimists, and we are on guard for that scenario to unfold,” strategists, led by Ajay Kapur, told clients in a report last week at which they predicted a growth of 7.7%. this year and 4% in 2022.

Beijing is determined to change its economic model from its boom years, in which the country burdened with debt and propelled itself to become the second-largest economy.

Xi is now overseeing a plan to stabilize debt growth, in order to ease financial risks, curb inequality, and channel financial resources into high-tech manufacturing to counter the threat of US technology restrictions.

The Common Prosperity Initiative “has shaken some sectors of the Chinese economy. Seen through the prism of financial markets, it’s about tightening the screws in a small set of industries. This misses the big picture. The agenda marks a fundamental shift in the policy mindset: from an overriding emphasis on growth to a greater weight on social equity. ”

Data released last week already showed a sharp slowdown in growth to 4.9% in the third quarter from 7.9% in the previous quarter. And more pain is likely to emerge as electricity shortages persist, while new Covid-19 infections are expected to increase in the coming days.

Even before the pandemic hit, China surprised economists with slower-than-expected growth caused by Beijing’s determination to ease debt risks, which meant it avoided widespread stimulus even as the trade war between states States and China threatened expansion.

After a moderate relaxation to cushion the worst effects of the coronavirus, its debt control policy was resumed, with real estate companies like China Evergrande Group feeling the biggest impact.

Xi also set out to reshape the consumer technology, private tutoring and real estate sectors, and officials argued they represent a waste of the country’s limited resources. For the most part, officials have accepted the resulting slowdown.

Chinese Premier Li Keqiang announced a growth target of “more than 6%” for the year in March. While analysts saw this as a sign that Beijing was prioritizing other political goals such as financial stability and environmental protection over economic growth, most at the time saw the goal as extremely conservative.

“I’ve joked that maybe Li Keqiang knew more than we do,” said Bert Hofman, a former director of the World Bank’s China office who now heads the East Asian Institute at the National University of Singapore.

But Beijing has signaled in recent weeks that it could ease some policies, telling banks to pick up the pace of home loans even as it repeated its promises not to use real estate as a short-term stimulus.

Any policy easing in the coming months will be aimed at “preventing disasters” rather than supporting growth, Hofman said.

“As long as growth exceeds 6%, I think China would be relatively happy,” he added.

The Governor of the People’s Bank of China, Yi Gang, recently said that he expects an expansion of around 8% for this year and, to achieve this, the economy would only need to expand by 3.9% in the current quarter, according to calculations by Bloomberg Economics. . 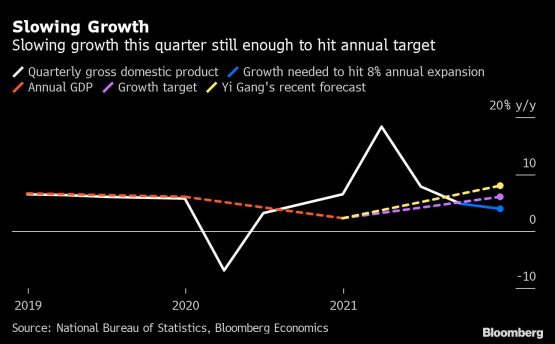 Among those at risk of less investment in China are commodity exporters such as Australia, South Africa and Brazil. Slower trade could also affect countries like Malaysia, Singapore and Thailand. The impact could be felt further, according to Tuuli McCully, Asia Pacific chief economics officer at Singapore-based Scotiabank.

“Countries like Chile and Peru send significant quantities of raw materials to China and will feel the impact of the weakness of the real estate activity and other investments in fixed assets in China,” he said. 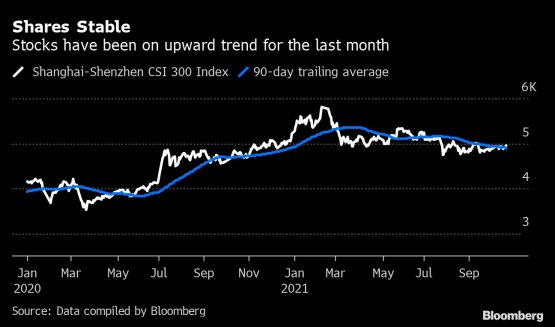 Financial market spillovers may be more contained as the 18% peak-to-low correction in China’s CSI 300 index this year did not cause global contagion, said Alvin Tan, head of Asia foreign exchange strategy at the Royal Bank. of Canada in Hong Kong. One possible advantage of a cooling Chinese economy is that it could ease global inflationary pressures, Tan said.

“However, the net impact is decidedly negative for a world still recovering from the pandemic,” Tan said.

For now, even the most pessimistic economists expect growth to top 7.5% this year, a relatively fast rate for an economy the size of China. Beijing has set a goal of doubling gross domestic product from 2020 levels by 2035, which implies an annual growth of around 5%. That can be a floor for policy makers.

China could see real estate investment fall by 10% in the first half of next year and still achieve 5% annual growth, as its credit cycle is near its lowest point and fiscal policy could recover before a crucial congress of the Communist Party in the fall, he said. Bo Zhuang, China economist at Loomis Sayles Investments Asia.

He predicts that Beijing could set a growth target of around 5.5% for next year.

Still, the recent weakness when combined with concerns about Evergrande is leading analysts to wonder if they remain overly optimistic about the near-term outlook.

Bank of America strategists described a “bearish scenario” involving a disorderly adjustment of the housing market in which property prices fall 10%, reducing sales and dissuading banks from lending to the sector. In this scenario, growth could reach 7.5% this year and 2.2% in 2022.

The other risk is that China’s policy makers may find it difficult to switch back to growth mode if they think it is necessary. Citigroup economists led by Xiangrong Yu noted that the electricity shortage that is holding back industrial production will make it more difficult to buffer growth by boosting investment in infrastructure. That kind of policy could only work next year once the energy crisis subsides, they said.

Local governments are also struggling to find viable projects to invest in, while poor financing from real estate developers has slowed down their land purchases, threatening to undermine a $ 1 trillion source of revenue for local governments.

“Property and energy issues will continue to affect growth in the fourth quarter,” said Houze Song, a China economics researcher at the Paulson Institute think tank. “Full-year growth looks likely to end below 8%.”