The US and Chinese governments made some progress in their economic and trade negotiations, and Chinese Vice Premier Liu He and US Treasury Secretary Janet Yellen made their second call in about four months.

China described the conversation as “pragmatic, candid and constructive” in a statement in Beijing on Tuesday, saying the two sides agreed that it is important to strengthen communication and coordination of macroeconomic policies as the global recovery faces a critical moment.

Overall U.S.-China relations have improved since a phone call between Presidents Joe Biden and Xi Jinping last month, after the U.S. administration was frustrated with Beijing’s decision to link the progress of the climate talks. with other topics. Soon after, the United States reached an agreement to release Huawei Technologies Co. CFO Meng Wanzhou from extradition proceedings in Canada, one of Beijing’s top demands.

Since then, the world’s largest economies have moved to rebuild lines of communication severed during years of fighting during the Trump administration over everything from trade and Taiwan to technology and the origins of the coronavirus. Xi and Biden are preparing to hold their first video summit since the US presidential election, although they have not set a date yet.

The call was the second time Liu and Yellen have spoken since Biden took office, following a discussion in June about how to “support a strong and continued economic recovery and the importance of cooperating in areas that are of interest to the United States, while while frankly addressing issues of concern, ”according to a US statement at the time.

While the tone of Tuesday’s Chinese statement was more positive than in June, there has been little substantial progress on trade or economic issues. The Chinese side once again expressed its views on US tariffs and sanctions and the treatment of Chinese companies, but Yellen’s response was not mentioned in either the statements by China or the United States.

China has repeatedly said that the United States should eliminate tariffs on Chinese exports imposed during the administration of former President Donald Trump, and has repeatedly denounced US sanctions against companies such as Huawei Technologies Co.

Yellen “frankly raised issues of concern” with Liu, according to a US statement following the call. The two sides agreed to continue talking, both statements said, without providing further details. 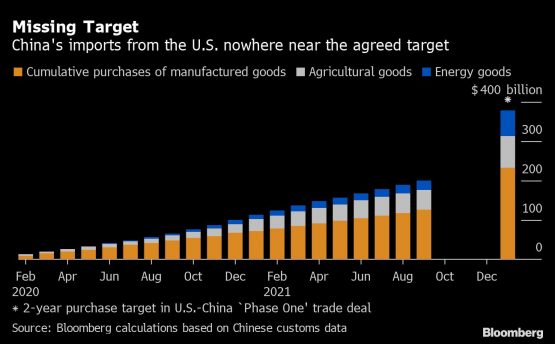 Earlier this month, US Trade Representative Katherine Tai said she would pressure the Chinese to honor their commitments in the 2020 trade deal. Later, she told Liu directly about US concerns “in regarding China’s state and non-trade policies and practices that harm US workers, farmers and businesses. ”

According to the Taoran Notes blog, connected to state media, a careful comparison of the statements from the calls this month and May shows that relations are stable and improving.

This small change is a sign that communication between the two parties “has improved in deeper and more specific areas and has become more extensive,” according to the blog, which has frequently commented on trade talks over the past three years.