is set to deliver its first medium-term budget on Thursday, fueled by faster-than-expected economic growth and windfall revenue from the mining industry.

Still, investors will look to the former trade unionist and head of economic transformation in the ruling African National Congress for concrete steps to cut debt and reduce the country’s fiscal deficits. Here’s what to keep in mind when presenting the revised fiscal framework for the next three years. With the economy 11% larger after a statistics agency review, and mineral royalty and tax revenues set to beat forecasts, the budget deficit will narrow faster than expected in the February budget. Economists in a Bloomberg survey predict a deficit of 7.1% of GDP in the fiscal year through March 2022, compared to the National Treasury’s estimate of 9.3% of GDP. Changes in the way GDP is calculated will also result in significantly lower debt ratios. Still, levels will continue to rise, peaking at 79.2% of GDP in fiscal 2027, according to the median of estimates from seven economists in a Bloomberg survey. That compares with the Treasury’s projection that it would stabilize at 88.9% of GDP a year earlier. The improved metrics should lead to a narrower and faster path to a primary budget surplus, the Treasury’s most critical fiscal anchor. Yet two-thirds of economists in a Bloomberg survey do not expect the government to meet its goal of achieving this by 2025. The surprise uptick in revenue has allowed the Treasury to reduce the amount of debt for sale in its weekly auctions twice since March. Additional advances in collections could reduce borrowing requirements that would help contain the cost of servicing the nation’s loans, the fastest growing expense item since 2011.

There is a risk that the government will see an improvement in debt metrics as an opportunity to get more loans, warned Frank Blackmore, chief economist at EF Consult. With a monthly social assistance payment of R350, reintroduced in the wake of deadly riots, looting and arson in July, which will end in March, the government is under pressure to expand social support measures offered to the poor and marginalized.

While civil society groups have proposed a basic income grant, business organizations believe it is unaffordable. The budget could hint at President Cyril Ramaphosa’s thinking on welfare and financing options. More allocations for state-owned companies with liquidity problems could compromise the fiscal framework. 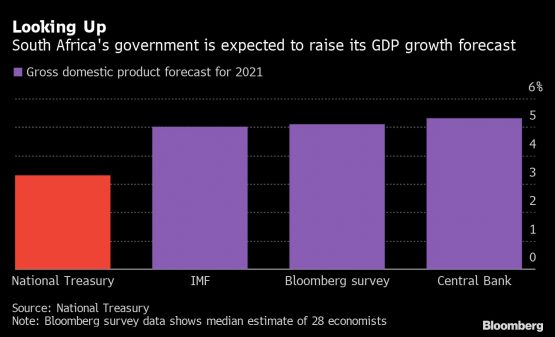 The economy’s recovery from last year’s virus-induced contraction has accelerated and the Treasury is now expected to raise its economic growth forecast for 2021 in line with other estimates.

Since the short-term outlook is likely to be affected by the vacillation of the Covid-19 vaccine, leaving the country vulnerable to new strains of infection and stricter lockdown measures, and the resumption of continuous blackouts that threaten to affect production, investors will look to Godongwana for an update on long-awaited economic reforms.