Shares of China Evergrande Group rose more than 16% on Friday afternoon, briefly putting them on track for their biggest weekly gain of 2021. Meanwhile, Chinese junk dollar bonds continued to rally amid signs that prices are authorities will offer support to alleviate the liquidity crisis in the real estate sector.

China’s banking regulator is set to complete an investigation into the relationship between the property developer and Shengjing Bank Co., the Financial Times reported, citing two unidentified people. Sunac China Holdings Ltd. plans to sell its vast culture and tourism business, according to people familiar with the matter, the latest builder looking to divest assets during an industry-wide liquidity crisis.

In other developments, Kaisa Group Holdings Ltd. has maturing dollar bond interest payments, while major Chinese builder Yango Group Co. is waiting to know whether the bondholders have agreed to delay payments. Chinese high-yield dollar bonds rose as much as 4 cents on the dollar on Friday, according to credit traders, extending the previous day’s gains after the recent market crash. A gauge of real estate stocks fell 1%, after the biggest two-day gain since 2015 amid short sellers undoing bearish bets. 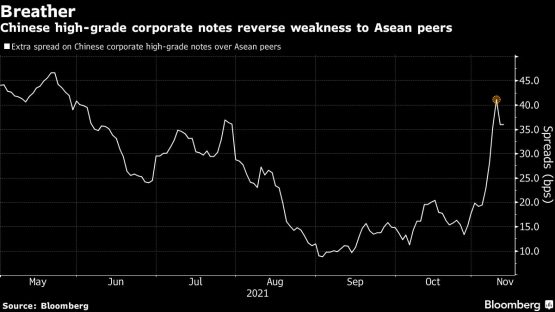 Sunac China Holdings Ltd. plans to sell its vast culture and tourism business, according to people familiar with the matter, the latest developer looking to divest assets during an industry-wide liquidity crisis.

The Beijing-based company has reached out to some potential buyers of the unit, though the talks are in an early stage and subject to change, said the people, who asked not to be named on private matters. It acquired the assets, which include hotels, resorts and amusement parks, over the past four years for about 65 billion yuan ($ 10 billion). Sunac did not immediately respond to a request for comment.

Poly Developments and Holdings Group Co. announced its own pending offering on Thursday.

China’s banking regulator is ready to complete an investigation into the relationship between Evergrande and Shengjing Bank, the Financial Times reported, citing two unidentified people. The regulator examined how the bank was exposed to Evergrande’s debts and the role of its chairman, Hui Ka Yan, in the corporate relationship, according to the report.

There appeared to have been potential regulatory violations by both Shengjing and Evergrande above the threshold of allowed debts of a single borrower, the newspaper wrote, citing one of the people.

The financial problems facing institutions like Evergrande are “controllable” and the spillover effects from the nation’s markets to the rest of the world are limited, said a former central bank adviser.

“Foreign investors don’t need to worry too much about China,” Yu Yongding, a former adviser to the People’s Bank of China, said at Caixin’s annual summit on Friday. China’s financial system “is still stable,” according to indicators such as non-performing loans, he said. “The problems of financial institutions like Evergrande are controllable.”

Chinese high-yield dollar bonds were up at least 2 cents on the dollar Friday morning, according to credit traders, extending the previous day’s gains after the recent market crash.

KWG’s 6% dollar bond due 2026 was indicated with an increase of 3 cents to 71.2 cents, also set for the third consecutive day of earnings that would be the longest streak since mid-October.

Many of the developers are facing strong repayment pressure in the first half of next year, Wang said. A marginal improvement in China’s credit policy for the industry has boosted investor sentiment recently, but the increase is unlikely. Developer profitability to rebound significantly, the report also quotes Citic Securities analyst Chen Cong.

Major Chinese developer Yango Group Co. will soon know if the bondholders agreed to delay the next payments.

Friday is the deadline for the owners of three separate notes totaling $ 747 million to vote on the debt swap proposed by the Yango Justice International Ltd. unit. Those bonds will be swapped for new notes due in September next year. . The company warned that without more time, “it will not be able to repay” the existing bonds at maturity.