South Africa’s political and economic decline is accelerating and the country is at risk of becoming a lower-middle-income nation by 2028, shows a model developed by Eunomix Business & Economics Ltd.

The forecast, advanced two years after a 2020 assessment, highlights the failure of the policies of the ruling African National Congress to accelerate economic growth, the Johannesburg-based risk advisory firm said in a report.

The decline was measured through a variety of political, social, and economic indicators. Eunomix linked the decline to the ANC’s inability to alter the structure of the economy established under apartheid, when the intention was to exclude the black majority from the country. While the white minority government used repression to enforce its model, the ANC created what Eunomix described as the world’s largest welfare state by some measures. 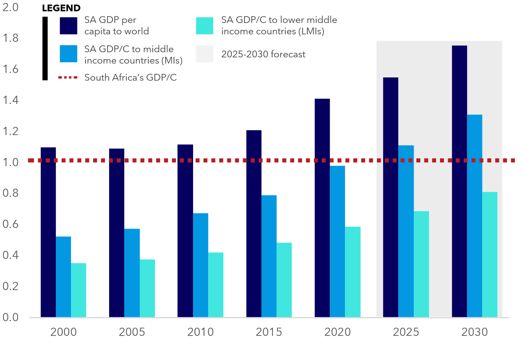 “Democratization ended formal political exclusion, but by not reversing economic exclusion, the ANC replicated a central attribute of apartheid,” Eunomix said. “The rejection of the labor-intensive export orientation as the cornerstone of development has been the fundamental mistake of democratic South Africa. In doing so, the ANC has crystallized the poisonous divorce that apartheid established between economics and politics.

“This growth collapse is now reaching a point where we are now faced with the high probability of an economic collapse,” said Claude Baissac, founder of Eunomix, in an interview. “We are before the beginning of a contraction of the economy like that of Greece and Argentina.”

A shrinking tax base, pedestrian economic growth and misguided policies, such as a push for products to be made locally while providing protection to local producers, are behind the drop, Eunomix said. That, coupled with growing discontent and growing violence, is pushing the nation toward “failed state” status, he said.

The World Bank defines lower-middle income status as countries with a per capita gross national income of between $ 1,046 and $ 4,095. South Africa’s GNI per capita was $ 5,410 in 2020, according to the World Bank. 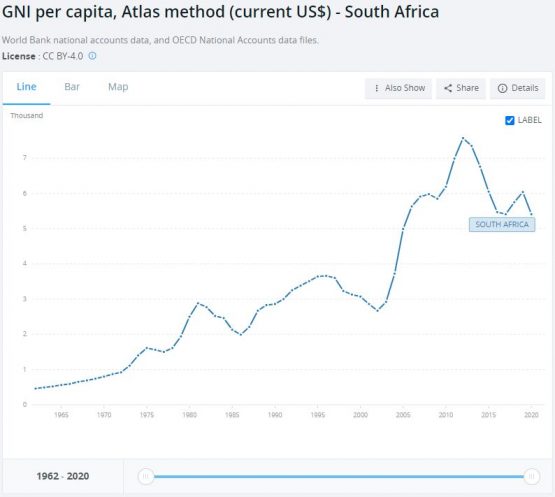 The annual economic growth rate averaged just 0.8% between 2015 and 2019, which means that South Africans effectively got poorer, the company said. That compares with an average of 2.5% between 2010 and 2014.

Without a policy change, that trajectory is likely to continue or get worse, Eunomix said, with a recovery expected from the impact of the short-lived Covid-19 pandemic.

Still, a change in policy could spark a rebound in the country’s fortunes, Baissac said.

“South Africa is in the tremendously fortunate position to have a lot of low-growing fruits. Sectors such as energy, including natural gas, transportation infrastructure and agribusiness have great potential, “he said. “A few simple steps to clarify policies and implement basic measures would immediately lead to investment and therefore jobs and growth.”