China’s manufacturing activity likely remained subdued in November, with weak domestic demand in the economy outpacing any relief coming from a decrease in energy shortages.

The official manufacturing purchasing managers index is forecast to improve slightly to 49.7 from 49.2 in October when released Tuesday, according to the median estimate from a Bloomberg survey of economists. That would be the third month that it remains below the key 50 mark, indicating a contraction in production.

The non-manufacturing indicator, which measures activity in the construction and services sectors, is expected to fall to 51.5 from 52.4 in the previous month. 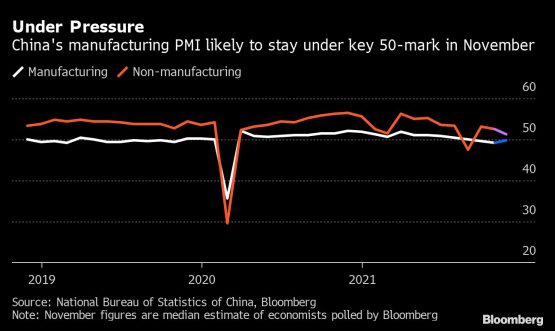 China’s power shortage, which plagued factory output in September and October, likely eased this month as coal producers increased production and inventories. However, the housing market crisis shows no signs of ending and frequent Covid-19 outbreaks continue to hold back consumption.

“Restrictions on the supply side have improved marginally, so production probably recovered a bit,” said Xing Zhaopeng, senior China strategist at Australia & New Zealand Banking Group Ltd. But “there are not many positive signs in domestic demand “, which continued to affect activities. , he said.

Economic growth is forecast to slow to 5.3% next year, according to a median from the Bloomberg survey, and some economists see an expansion as low as 4%. Bloomberg Economics forecasts growth to be 5.7%, as the government will likely target a 5-6% range.

“In 2021, politics played a secondary role in setting the growth trajectory. In 2022, it will be critical. The extent of the slowdown will largely depend on the balance China finds between supporting short-term growth and advancing long-term reforms.

… We see the People’s Bank of China cut the interest rate on its one-year medium-term credit facility by 20 basis points and the mandatory reserve ratio by 100-150 basis points by the end of 2022. ”

The authorities are trying to moderate the sharp decline in the real estate market, while providing specific support to areas such as small businesses and green technology. Officials will reveal more clues about how much policy easing they plan to provide during two key political meetings in December of the Politburo and the Central Conference on Economic Work.

China will adopt a more proactive macroeconomic policy next year to respond to the challenges of an uneven global economic recovery and instability to contain the pandemic, the Securities Times, run by the People’s Daily, said in a cover comment on Monday.

Authorities have exercised restraint in the use of monetary and fiscal tools amid an economic slowdown this year, thus creating enough room for political maneuvering next year, according to the commentary.

The slowdown is being cushioned by strong export demand, which probably remained strong in November, judging from the latest South Korean shipping figures.

Consumption and travel continue to be affected by a resurgence of virus cases and the country’s growing determination to stick with its strict Covid Zero strategy. Metro passenger traffic in six major Chinese cities declined less than 10% in November from October, although the drop is less than that of the August outbreak, according to Xing.