The omicron variant threatens to widen an already huge gap in access to Covid injections as scientists prepare for the possibility that restructured vaccines are needed and rich countries rush forward once again.

Omicron is emerging just as vaccine supplies destined for low-income countries have started to increase. Rich governments at the start of the pandemic kept most of the initial doses, leaving vast parts of the planet behind.

Now the goal is to avoid another episode of inequity. The UK is already moving quickly to secure messenger RNA shots tailored to omicron and other possible variants if they are developed as part of new deals with Pfizer Inc. and Moderna Inc. The recent discovery of the variant in the US. It can trigger a similar action. .

“That’s the big concern, a repeat of what happened in the last year and a half,” said Ellen ‘t Hoen, director of Medicines Law & Policy, a Dutch-based research group. “If it is not this variant, there will be another.”

Even if vaccines maintain their potency, health groups pushing to protect vulnerable regions are under increasing pressure. About 100 countries have not met the World Health Organization goal of vaccinating 40% of their populations, and more than half are at risk of falling short by the end of 2021. Scientists worry that there will be disparities in vaccines and the continued spread of the virus. more dangerous strains that pose a risk to both rich and poor nations.

“Inequality stems from scarcity, and when there is scarcity, people with resources will use their resources to meet their own needs first,” said Richard Hatchett, director of the Coalition for Innovations in Epidemic Preparedness. “So the question would be: if this turns out to be a really dangerous variant, will countries rush to secure supplies?”

CEPI is discussing the possible deployment of modified vaccines with other partners in Covax, the global vaccine distribution program, he said. Covax is in a more advantageous position than it was at the beginning of the crisis when it was still building, and any shortage of shots shouldn’t last as long this time, but the concern “is real,” he said.

“If the data suggests that we really need to introduce an omicron vaccine, we will want to act as quickly as possible to secure the doses to reduce the inequity that might otherwise arise,” he said.

So far, there is little evidence that the newly discovered variant erodes the protection provided by current vaccines and will likely prevent serious cases, the World Health Organization’s chief scientist said Wednesday. However, Moderna CEO Stephane Bancel shook the markets earlier this week when he said the surprising number of mutations in omicron suggests new injections would be needed to prevent infections. Many questions remain.

Vaccine manufacturers don’t wait for answers. They have already started work to tailor their vaccines, and Pfizer and BioNTech SE said they will be ready with a vaccine targeting omicron in 100 days, if needed. Pfizer expects data on how well its inoculation holds up within two to three weeks.

Omicron could trigger a new chase for limited supplies, and enough doses for a global launch won’t be produced until late next year, according to Airfinity Ltd. At best, 6 billion doses could be produced by October 2022. London-based data firm estimates. But wealthy governments will try to corner the market, said Shabir Madhi, a vaccinologist at the University of the Witwatersrand who led the trials of AstraZeneca and Novavax injections in South Africa.

“We can observe the behavior of the rich countries in the past,” he said. “It would be very surprising if they developed some kind of social conscience.”

That could lead to further delays in the effort to bridge the vaccine gap, according to Thomas Bollyky, director of the global health program at the Council on Foreign Relations. 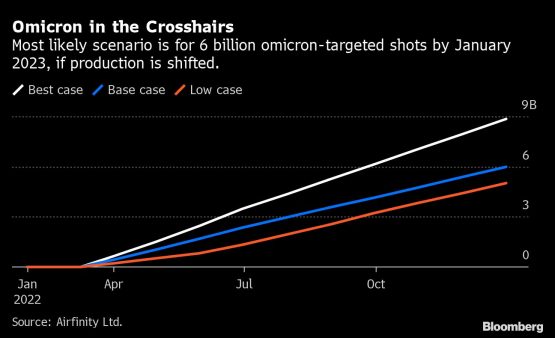 “It will create a source of demand for vaccine manufacturing that was expected to change at some point to meet global needs,” Bollyky said. “If we were to develop a modified vaccine to address this new variant, there is a possibility that some of that capacity would go into producing those vaccines, presumably initially for high-income countries.”

It’s a scenario that could repeat itself as the coronavirus continues to evolve. Some researchers anticipate that vaccine updates might be necessary if inoculations slowly become obsolete over time due to variants.

In the face of that threat, the groups behind the WHO-backed Covax are calling for a series of steps to increase vaccination rates. Donations from wealthy governments have trickled in and only one country, Switzerland, had responded to a call to defer Covax in the supply queue as of Nov. 24.

More than 90 million donated doses have been delivered to Africa through Covax and the African Vaccine Acquisition Trust, and millions more through direct agreements between countries and manufacturers. However, most of those vaccines have arrived unannounced and with a short shelf life, making them difficult for already depleted health systems to use, health groups said earlier this week.

Health officials have urged countries and manufacturers to commit to providing supplies in a more predictable and reliable way. Donations should come with essential components, such as syringes, to avoid additional costs and delays, and at least 10 weeks until maturity when they arrive, they said.

One possible ray of hope is that increased supplies from China to lower-income nations will spur other countries to follow, Bollyky said. Chinese President Xi Jinping has pledged to send another 1 billion doses of vaccines to African countries. But health advocates expressed doubts about a significant shift on the access front. “This is going to happen over and over again,” said John Amuasi, a specialist in global health and infectious diseases at the Kumasi Center for Collaborative Research in Tropical Medicine in Ghana. “We kind of ignore this very basic science and focus on vaccinating the West as much as possible, thinking that that will help us, and it clearly doesn’t work this way.”

Rich governments must take the lead, providing generous funding and insisting on the ability to determine where supplies go and how intellectual property is shared, according to ‘t Hoen. Omicron could have been a catalyst in propelling countries and drug companies to push immunization globally, but this wouldn’t be the first time the world has turned its back on low-income regions, he said.