The selloff was 19.7% from its closing record on Sept. 7, erasing about $ 224 billion in market value. Meta stocks have come under pressure this week as investors grappled with the uncertainty surrounding the omicron variant and the possibility that the Federal Reserve will end its pandemic support program earlier than expected. It closed 1.1% lower at $ 306.84 on Friday, reducing a previous decline of as much as 3.5%.

Meta shares have been hurt in recent months by negative comments about Facebook’s business model by whistleblower Frances Haugen, according to David Trainer, who covers Meta for investment research firm New Constructs. Haugen appeared before the House of Representatives technology subcommittee earlier this week, after accusing the social media giant of putting “profit before safety” of its users in October.

Growing concerns about the impact of Apple Inc.’s data collection rules and supply chain challenges have also contributed to the decline, causing Meta’s biggest drop in nearly a year in October.

Meta shares fell 7.9% for the week, suffering their worst weekly decline since June 2020. 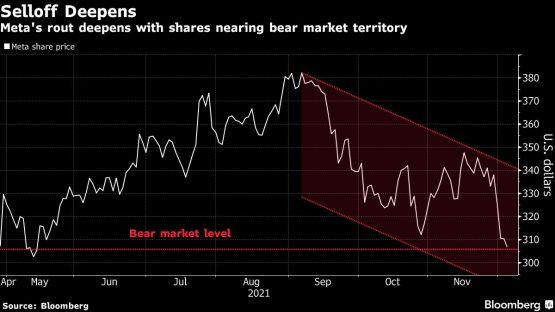 A weaker-than-expected quarterly report released in October also hurt investor sentiment. The company’s revenue in the third quarter fell short of consensus estimates, as did its expectations for the fourth quarter. Several analysts cut their price targets for the stock in the wake of the results, though they remained broadly positive about the company, citing its long-term valuation and growth potential.

Before the pandemic-driven market crash last year, the company last entered a technical bear market in June 2019, when the U.S. Federal Trade Commission launched an investigation into potential antitrust violations.

Still, the stock rallied through the pandemic and had been down this year, rising 42% from Jan.4 to its Sept.7 peak, outpacing its peers like Twitter Inc. and Netflix Inc. But its recent slide has seen stocks trading 19.8 times future earnings, making Meta the cheapest stock among US mega-cap tech companies.

Newbridge Securities chief market strategist Donald Selkin said that Meta appears to be reasonably priced at current levels, and that the drop discards much of the bad news surrounding Facebook.

“It’s worth sticking your toe in the water,” he said in a telephone interview.

The lower valuation doesn’t make the stock any more attractive to Trainer of New Constructs, who views Meta as the worst-ranked company among its megacap peers. He expects the stock to be “perennially underperforming” for years to come given headwinds in Facebook’s legacy business. Trainer said he is interested in monitoring the company’s shift in focus to the metaverse, especially the pace of the transition as competition in the field increases.

However, so far Meta has latched onto its Wall Street following, with more than 80% of analysts recommending that investors buy stocks, according to data compiled by Bloomberg. The stock’s 12-month average analyst price target of $ 400 implies a potential return of around 31% from current levels.