The growth of investment in fixed assets moderated to 5.2% in the first eleven months of the year. Real estate investment grew 6% in the same period, slowing from 7.2% during the January-October period, as financing rules remained tight and home sales plummeted. 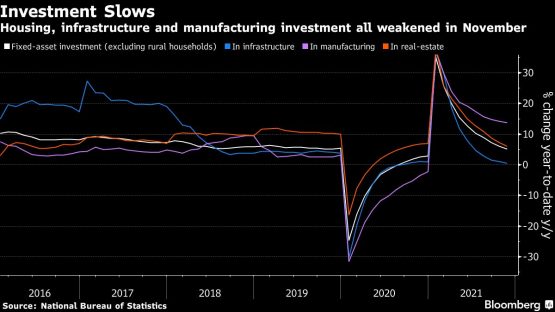 The data highlights the downward pressure on the real estate economy and the magnitude of the challenge facing the Chinese government in stabilizing the world’s second-largest economy. Beijing has recently shifted its focus to stabilizing growth, with the central bank easing monetary policy and the Communist Party ordering more fiscal spending in 2022.

“Only when growth expectations are stable will investment and consumption recover,” said Bruce Pang, head of macro and strategic research at China Renaissance Securities Hong Kong Ltd. “That is why the authorities are implementing more stimulus packages and policy support to design such expectations. ” While Beijing is expected to offer more credit and signaled some easing of controls on the property market to support “stability,” officials last week upheld the basic stance that “houses are for living, not speculation.” . 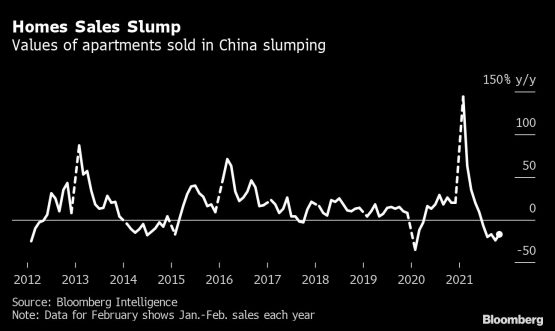 Retail sales growth weakened to 3.9% in November, falling short of economists’ forecast for a 4.7% increase. Sales in the restaurant and catering sector fell 2.7% as people stayed home amid new virus outbreaks.

Earlier on Wednesday, the central bank kept the interest rate on one-year loans to banks unchanged and only rolled over about half of maturing debts, drawing liquidity out of the economy. However, a recently announced cut to banks’ mandatory reserve ratio will take effect from Wednesday, increasing the amount of money financial institutions have available to lend.

China’s November activity data suggests the economy is still under pressure, although the production side appears to be stabilizing. Pressure on the demand side was clear, with growth in both fixed asset investment and retail sales extending the slowdown. We expect fiscal and monetary policies to be more favorable in the coming months.

“The international environment is increasingly complex and bleak and there are still many limitations in the national economic recovery,” the National Statistics Office said in a statement. We must “combine cyclical and counter-cyclical macro policy adjustments to stabilize the overall macroeconomy.”

Investment in infrastructure, another weak link in China’s slow recovery this year, increased at a slower pace of 0.5%. Local governments have stepped up their efforts to borrow money and start new projects, and Beijing has allowed authorities to start selling next year’s bonds from January 1 to speed up spending.

The surveyed unemployment rate rose 5%, while the average number of hours worked per week fell to 47.8 from a record 48.6 in October. The unemployment rate for 16-24 year olds increased slightly from 14.2% to 14.3%.