The metals vital to making rechargeable batteries in electric cars will extend their impressive rally through 2022, potentially increasing costs for automakers and weakening a key weapon in the race to curb climate change.

Battery metals are in the midst of an unprecedented boom as the global push for a greener future triggers demand for materials like lithium, cobalt and nickel, at a time of tight supply exacerbated by the pandemic. . That will likely drive up battery costs and could delay the widespread adoption of electric cars. Now, the omicron variant complicates things even more.

“The new Covid-19 variant has put a cog in the wheel of global recovery,” said Kwasi Ampofo, director of metals and mining at BloombergNEF. “We expect the supply chain constraints that affected the movement of materials this year to continue well into 2022.” Prices for lithium, graphite and cobalt are likely to remain high, possibly declining only in 2023, he added, although nickel could see a decline in prices for the second half of next year.

A lithium price index has more than tripled this year to a record high. Chinese producer Chengxin Lithium Group expects prices to “remain at relatively high levels for a while,” bolstered by buoyant downstream consumption and limitations on brine production capacity and spodumene supply. “It is difficult to see substantial changes in the rigidity of the global market in the short term,” the company said in a written response to Bloomberg News. Green exuberance has hardened the lithium market this year after years of underinvestment when prices were low. As miners rush to expand capacity, long-term demand for electric cars bodes well for the material used in virtually all electric vehicle batteries. Sales of electric passenger cars are projected to increase from 3 million in 2020 to 66 million in 2040, according to the BloombergNEF Economic Transition Scenario.

“We expect global average lithium prices to continue to rise over the next several years as contract prices begin to catch up and supply continues to fall short of demand,” said Cameron Perks, analyst at Benchmark Mineral Intelligence. “A balanced market is not projected until 2025 or 2026, at which point prices may start to decline.”

Cobalt has doubled in price this year. The metal has been grappling with supply chain disruptions in South Africa, which exports most of the world’s cobalt supply out of the Democratic Republic of the Congo, according to Alice Yu, an analyst at S&P Global Market Intelligence. Omicron risks worsening logistics challenges and could delay the timing of a price correction, he said. 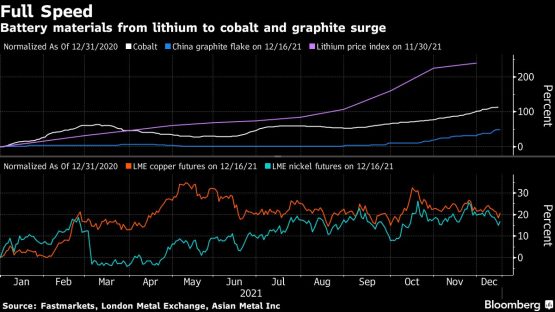 Still, the outlook is not entirely rosy. “The supply side has increased cobalt production capacity and that could be in line next year,” said Wang Wentao, general manager of trader Shanghai Qin Cobalt Industrial Co. Banks are starting to raise interest rates, he added. .

Nickel is up 17% this year, but Indonesia’s aggressive supply expansion could push the market into a surplus in 2022, according to S&P Global Market Intelligence. Prices were hit in early December after Tsingshan Holding Group Co. said it is operating its first production line for nickel matte, an intermediate product that can be processed into battery chemicals.

Graphite prices have risen sharply since September amid energy restrictions in China, the world’s largest producer of anode material. “With the expected increase in energy demand this winter, energy supply may be tight and therefore flake graphite production may not fully recover until the first half of 2022,” according to a BNEF report. .

A large part of the cost of a battery, the most expensive part of an electric car, is tied to commodities that have recovered this year. In China, the world’s largest electric vehicle market, battery makers have already begun to feel the impact of the rising cost of raw materials. 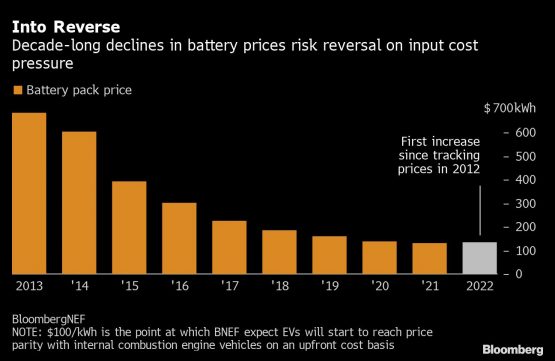 SVolt Energy Technology Co., which has an agreement to supply Jeep maker Stellantis NV, has already pointed out problems with materials including copper foil, while Gotion High-tech Co., a partner of Volkswagen AG, told customers In mid-October I needed to raise prices for batteries.

Battery costs are ongoing for the first jump since BloombergNEF began tracking them in 2012, which is bound to deal a blow to the auto industry. Electric vehicles are expected to reach price parity with gasoline and diesel cars when a battery pack drops below $ 100 / kWh, but higher raw material costs could delay that by two years to 2026, according to BloombergNEF.