Oil extended the declines, falling more than 3% as the rapid spread of the omicron variant of the virus raised concerns about the demand outlook.

Futures in London fell about $ 71 a barrel after falling 2.2% last week. Infections are increasing from the US to Europe as authorities struggle to control the spread of omicron. That has led to restrictions on air travel and tighter restrictions on movement, creating fears that will flow into weaker energy demand.

The structure of the oil market also shows signs of weakness. The early timeframe for Brent briefly changed back to a bearish contango pattern on Monday, indicating that the market is oversupplied. 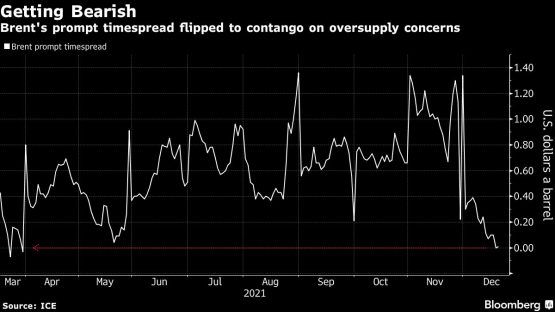 Bearish headwinds are picking up in the holiday period, when thinner trading volumes can exacerbate price swings. Demand in Asia is weakening, central banks are shifting toward tighter monetary policy to try to curb accelerating inflation, and President Joe Biden’s economic agenda suffered a setback after Senator Joe Manchin rejected a spending package. .

“We can expect a week of a lot of volatility,” said Jeffrey Halley, senior market analyst at Oanda Asia Pacific Pte. “But it’s dangerous to assume that oil will sink further from here because OPEC + is sitting there watching, and they’ve left room to react very quickly if necessary. ”

New York State broke a record for new infections and New York City Mayor Bill de Blasio called on the federal government to increase the supply of tests and treatments to the city amid a surge in infections caused by omicron. The Dutch government announced plans to enforce a stricter lockdown, while Germany’s health minister warned of another wave of viruses caused by omicron.