Shopping levels at Massmart-owned Makro store in Springfield, Durban, have returned to pre-July unrest levels just after a week of reopening, Massmart told Moneyweb on Monday.

The store, which was closed for nearly five months after being looted and damaged, resumed operations on December 13, welcoming customers and employees.

Massmart, a JSE-listed retail and wholesale group, was among the worst hit during the riots that swept across KwaZulu-Natal and parts of Gauteng in July. The riots followed the arrest of former President Jacob Zuma.

The Makro Springfield megastore, along with the Makro Pietermaritzburg store and two Massmart distribution centers in Riverhorse Valley and Cato Ridge in KwaZulu-Natal, were the hardest hit by the impact on the group. However, some of its game stores were also affected by looting.

In a sales update released in early November, Massmart reported that looting and destruction related to the riots resulted in around R1.3 billion in stock losses, most of which was seen in KwaZulu-Natal.

Overall, Massmart said that the July events caused the company to lose around R650 million, as the South African Special Risk Insurance Association (Sasria) did not cover the full extent of the wholesaler’s losses, which it estimated at around R2. .5 billion.

Massmart’s group senior vice president of corporate affairs, Brian Leroni, told Moneyweb that the Makro Springfield store has received a lot of support from the community since it had to close its doors for repairs and restocking. 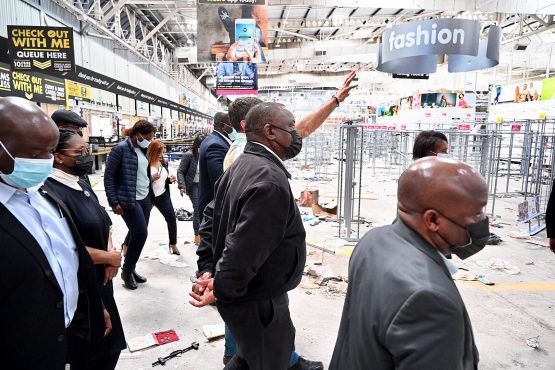 President Cyril Ramaphosa and some ministers visited the Springfield store after the riots. Image: GCIS

“Following the damage caused to the store during the riots, we have received regular inquiries from our customers, particularly B2B customers, about the store reopening,” Leroni said.

“This has clearly turned into good levels of support for purchases at the reopened store, which have reached pre-riot levels.”

Despite suffering serious damage and loss from the riots, the group says it has not fired any of the store’s employees.

Massmart, which also owns the DIY chain Builders Warehouse, said it learned from the July events and has implemented a variety of measures that will help strengthen security in its stores through 2022.

Regarding its Makro Pietermaritzburg store, which was not only looted but also devastated by arson, the group said the store is currently being rebuilt and will reopen in 2022. However, the exact date of the sale is unclear. reopening.

“Our Makro Pietermaritzburg store, which involves a complete rebuild, is scheduled to open next year … [but] it’s hard to say [when] at this stage, ”Leroni said.

“Our goal is to open it as quickly as possible in the context of a total rebuild.”