There is mounting evidence that China is encouraging state-owned developers to take market share from stressed rivals to limit the spread of contagion from the debt-ridden industry.

Separately, a deadline is looming for bondholders to vote on China Evergrande Group’s plan to delay an early redemption option on one of its yuan-denominated bonds. An online meeting held by property developer Hengda Real Estate’s onshore unit for the note holders is due to wrap up Monday.

There are $ 1.42 billion in bond payments due this week among stressed builders, Bloomberg calculations show. 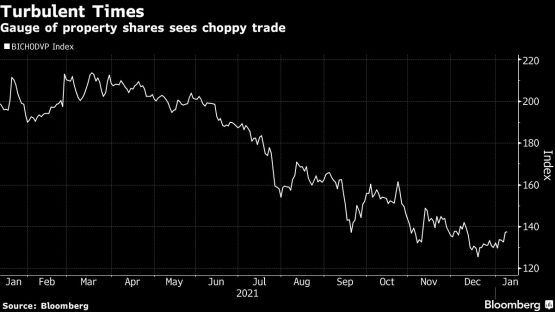 Evergrande has moved its headquarters to Guangzhou after the developer pulled out of its main Shenzhen building in December, The Paper reports, citing unidentified people. Evergrande did not immediately respond to a request for comment from Bloomberg.

Chinese developers’ domestic bonds rebounded, with some rising further in a month, as Cailian reported that Guangdong province is encouraging some state-owned companies to buy projects from struggling peers. Xiamen Yuzhou Grand Future Real Estate Development Co.’s 7.5% local note due 2024 closed up 8% at 33.49 yuan, according to data compiled by Bloomberg.

The developer jumped after REDD reported that China Vanke Co. was in talks with the developer for the acquisition of assets, citing an unidentified source. Investor relations officials at both firms said they had no updates when contacted by Bloomberg. A Bloomberg Intelligence gauge of mainland developers rose to 4.3%, the most since Nov. 19.

Modern Land, a developer of low-energy real estate projects, faces calls from creditors for early repayment of debt as investors in the country’s troubled real estate companies grow increasingly impatient. The signature, which unfulfilled on principal or interest on a $ 250 million green bond in October, it has received demands from some holders of its total of $ 1.35 billion offshore senior notes, it said in an exchange filing.

Further declines last week in high-yield dollar bonds from Chinese developers indicate that the bottom may not yet have been reached, “unless significant easing measures targeting the sector are introduced in the short term.” says Goldman Sachs.

Stronger developers with better fundamentals and proactive financial management are better positioned to secure refinancing, amid cautious sentiment and high default risk in the industry, says S&P Global Ratings. The risk of default will likely increase in Q1, especially if the policy requirements are not significantly eased, he said.

Shimao Crisis Gives State-Owned Companies Advantage: What to Watch in China (8:58 am)

In China’s real estate market, the state advances while the private sector retreats. The Chinese authorities appear to be encouraging government-controlled companies to take market share from their stressed-out rivals as a liquidity crisis hits the private sector.

The developer is seeking buyers such as funds and international investors primarily for its commercial properties, including those belonging to its Hong Kong-listed real estate unit, according to Caixin, citing sources it did not identify. He appointed the agents in December, according to the report.

Shimao, which builds residential, hotel, office and commercial properties, is among the largest issuers of debt in China’s real estate sector. A unit of Shimao Group Holdings Ltd. was said to have defaulted on a local loan that is due on December 25.

Agile Group Holdings Ltd. has entered into agreements to sell 14 non-essential properties at a total sales price of 2.8 billion yuan ($ 439 million) from July to December, according to a report from the Hong Kong Stock Exchange. The company expects to have a cash raised of around 1.65 billion yuan from sales in 2022 and intends to use the proceeds as general working capital.