The stock is on its way to its worst week since September, while a 2024 dollar bond is also at an all-time low.

Shares in China Evergrande Group gained after it avoided what would have been its first public bond default on land. The stock rose as much as 2.5% after three days of declines. An Evergrande unit said it obtained investor support to delay prepayment of a 4.5 billion yuan ($ 707 million) promissory note.

Sunac China Holdings Ltd. said late Thursday that its $ 580 million share sale was a precautionary measure and that it had no plans to raise more funds in the stock market in the near future. China’s third-largest builder sold shares at a 15% discount to help pay off some loans. 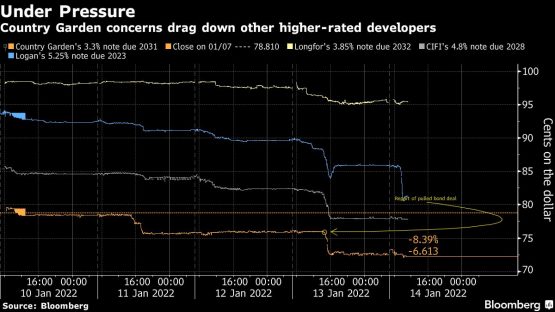 Chinese construction firm Logan Group Co. does not have any privately placed debt, the company said, as some of its dollar bonds are on track to post record weekly declines amid market talk about the existence of private debt.

Such conversation is a “total rumor,” said a Logan spokesman. The company had nearly 40 billion yuan in cash at the end of 2021 and is preparing to sell a yuan bond in the medium term.

Junk-rated dollar bonds from Chinese developers fell further, putting the high-yield market in line with its biggest declines in at least two months.

The Shanghai Stock Exchange will review Poly Property Group Co.’s request to sell bonds worth up to 5 billion yuan. The company plans to use the proceeds to pay off debt, increase liquidity, as well as for project construction and project mergers and acquisitions.

The Shanghai Stock Exchange Property Index fell as much as 3% on Friday, heading for a fourth day of losses, the longest streak of declines since Nov.30 and on track for its biggest four-day decline since September. .

Country Garden shares fell as much as 3.9% in Hong Kong to their lowest level since March 2017. Its dollar bond due 2024 fell 1.3 cents on the dollar to 86.8 cents, marking a record low. as shown by prices compiled by Bloomberg.

“Country Garden may place shares after failing to issue $ 300 million in convertible bonds due to low demand,” said Daniel Fan, a credit analyst at Bloomberg Intelligence. The Sunac China stock placement could be a signal of investor demand for stocks rather than bonds, including convertibles. Country Garden, which has not issued shares since January 2018, has $ 425 million of 7.125% bonds due this month, Fan said.

DaFa Properties Group Ltd. says that $ 144.1 million of its 9.95% dollar note due January 18, representing about 78% of the total principal amount outstanding, was validly offered for the exchange.

The company decided to waive the minimum acceptance quantity condition to its exchange offer, it said in a statement to the Hong Kong stock exchange. It will issue $ 138.4 million in new notes at 12.5% ​​annual interest maturing on June 30.

Sunac China said it had total cash of about 160 billion yuan at the end of 2021 and “can fully meet short-term debt obligations and project development needs,” according to a company statement.

Bondholders of more than half of the 4.5 billion yuan principal of the note have agreed to a proposed payment extension, the developer’s Hengda Real Estate Group Co. unit said in a filing on the Shenzhen Stock Exchange. The firm had a January 8 deadline to meet investor demands for an early payment before seeking a delay last week, and voting on the extension offer was extended through Thursday.

We use cookies to ensure that we give you the best experience on our website. If you continue to use this site we will assume that you are happy with it.Ok